As an African wildlife photographer and private safari guide, Greg believes in the raw beauty of Africa and in the power for photography to give wild animals a voice. His photographs are intimate moments that he has experienced in wild Africa and as such no bait, camera traps, digital manipulation or captive bred animals are used in his work. See his wildlife prints gallery page and read more about his fine art wildlife prints.

Greg has resided in 4 African countries and lead private guided safaris in a further 15. He is the author of multiple books. His Africa coffee table book, entitled ‘AWE’, is a portfolio of his work in Africa and contains a decade’s worth of imagery. ‘Phototips – Getting It Right In Camera’ is a how-to book for wildlife photographers.

Greg offers the finest small group photo safaris and private guided safaris – all make for life defining moments. Each Africa safari is designed around getting the most out of the region, the wildlife and your camera. His skillset as a private safari guide includes wildlife behaviour, creative camera settings, working with light/angles plus location specific insight and knowledge. All these elements make for a once-in-a-lifetime safari experience. Watch iPhone YouTube videos of his recent safaris. 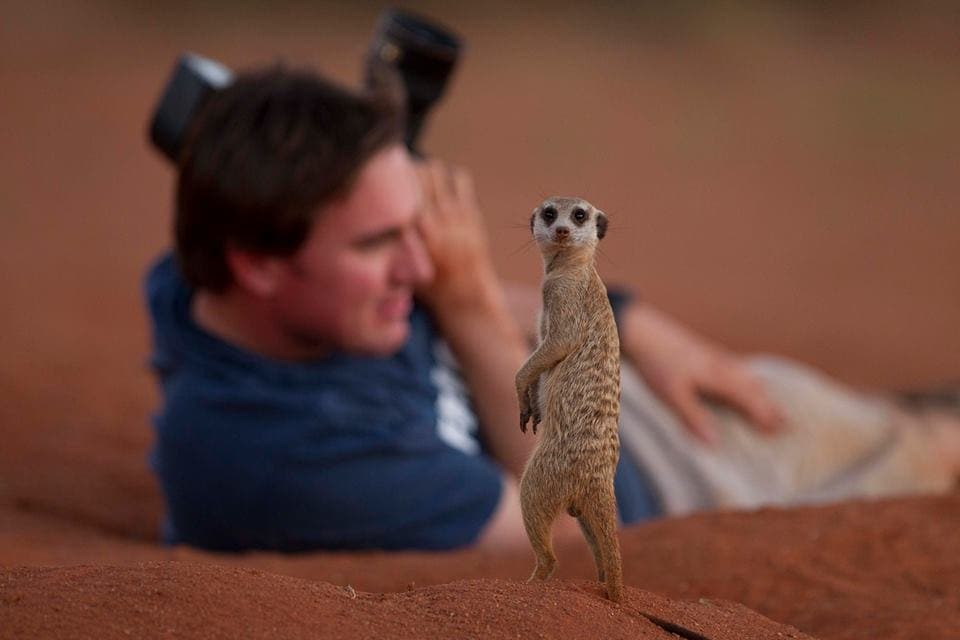 The first few years of his career were spent in Timbavati Game Reserve (South Africa), where he served an apprenticeship as a Wilderness Trails Guide. It was during these years that he set aside devoted time to study every aspect of the African bush, including identifying as many species of wild flowers, trees, grasses and dung beetles as possible! His days were spent stalking Africa’s big game on foot and these skills later proved invaluable as he focused his attention to become an African wildlife photographer and private safari guide. Since those early days, he has gone on to photograph some of Africas wildest, remotest and largest ecosystems. His artwork has hung in both the London and Sydney Natural History Museums and his GDT Authentic Africa Galleries have been exhibited across the globe, from New York to Singapore.

Although he is an African wildlife photographer and private safari guide he has also photographed brown bears and wolves in Russia, polar bears in the Arctic, tigers in India and Pumas in Chile. But African wildlife remains his true love and he is a true African specialist, spending 99% of his time working as a professional African wildlife photographer and private safari guide, across the continent (watch safari videos made with his iPhone on recent safaris). His fine art wildlife prints are easily recognised by the tangible mood, primitive energy and vibrant colours that they convey. These intimate interactions with the natural world, skilfully composed and captured in-camera, have brought him international acclaim. He was invited to exhibit his work for the National Geographic gallery in London and Singapore respectively, where his solo exhibition titled ‘Africa’ sold out in its first month, before being extended. The London gallery on Regent Street was seen by an unprecedented 40 000 visitors each day. 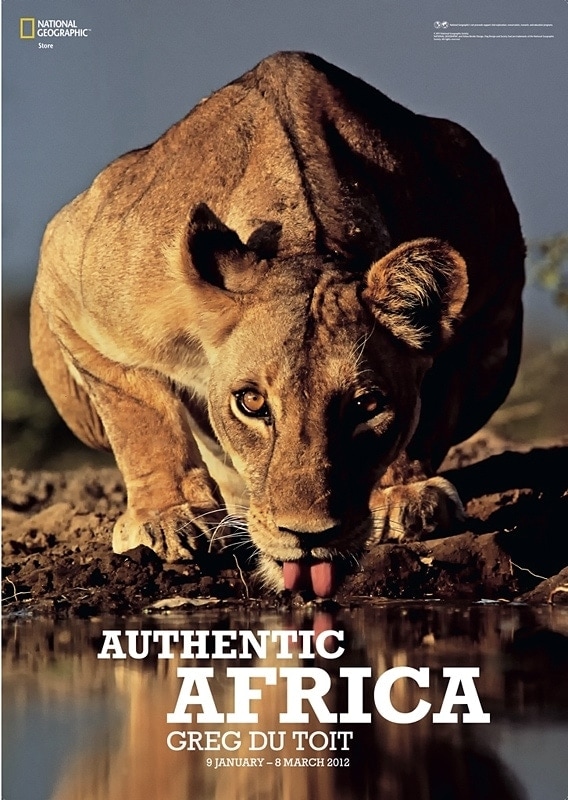 Although an African wildlife photographer, private safari guide and author by profession, his artwork, safaris and writing is much more than a career to him. It is a way for him to channel his passion for Africa and to share the beauty and AWE of Africa’s wild places with others, thereby contributing to their continued existence. Personal highlights in his career an African wildlife photographer include undertaking a three-month project that entailed camping in the remote north of Kenya, where he lived alongside local Samburu tribesman, and got to experience their culture first hand.

Another special time for him as an African wildlife photographer was the extensive undertaking to photograph the remote region of Kenya’s south Rift Valley, home to the traditional Loodokilani clan of the Maasai tribe. It was during this sixteen month project that Greg was able to spend much time on the remote shores of Lake Natron, not only the largest breeding ground for Lesser Flamingo in the world, but also one of Africa’s most inhospitable lakes. His time spent documenting from the shores of Lake Natron led to an Africa Geographic cover story titled ‘Living on the Edge’. While in Kenya he also undertook to photograph nomadic free ranging lion, which eke out a precarious existence beyond formal park or reserve boundaries. Setting up hides and spending 270 hours sitting in the water, he was finally able to capture images of these wild and elusive creatures. This project resulted in a story titled ‘A Waiting Game’ published in the BBC Wildlife magazine. He was also interviewed about this story on NBC’s Today Show as well as on BBC World Service (click here to see more of Greg in the media). This story received wide media coverage the world over and lead to the cover photo of his first Africa coffee table book and is a central theme in his memoir, ‘Not Without My Binoculars’.

Greg also spent a total of 22 months in the deep south of Tanzania where it was so remote and wild that in the south of Ruaha National Park this African wildlife photographer had to first slash rudimentary bush tracks, before undertaking to photograph the area. This project led to the first ever published photographic portfolio on Ruaha National Park and was a cover story for the Africa Geographic magazine and titled ‘Beneath The Radar’. A more recent private safari guide adventure entailed trekking with local Maasai guides and pack mules over the wall of the Great Rift Valley, walking from the Masai Mara to Lake Natron.

As an African wildlife photographer Greg was commissioned by the BBC Wildlife Magazine to assemble a groundbreaking portfolio on African leopards. This project lasted three years and saw him spending over 600 hours in the field photographing African leopards and resulted in a 13 page published portfolio. You can now have Greg as your private safari guide and learn his recipe for photographing leopards on this Africa photo safari that takes the form of a predator workshop. 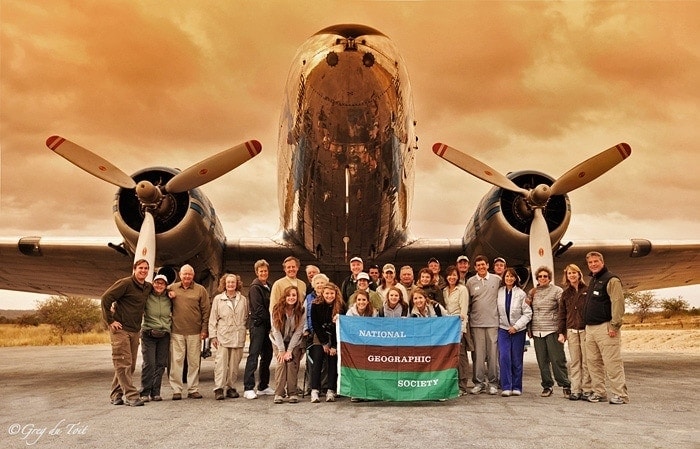 Most recently Greg’s images have featured in the ‘Remembering Wildlife’ series of Africa coffee-table books and auctions, hosted at London’s Royal Geographic Society. These projects are a collaboration of African wildlife photographers and private safari guides, and all proceeds have gone to wildlife conservation. Greg has contributed his images and prints to all Remembering Wildlife books and auctions (currently 6 books). He is also an ambassador for lion conservation in Kenya where he supports the ‘Rebuilding The Pride‘ lion project helping to protect the free ranging lion population in the south Rift Valley of Kenya. Through the hosting of exhibitions in both Kenya and the USA, as well as the selling of his books at these events, he helps raise funds and awareness for this project. As a private safari guide he also offers a very special safari to visit this area, which includes Shompole hide photography.

As an African wildlife photographer Greg has given presentations as far afield as northern Finland (read more about him as an adventure keynote speaker). He also offers the best bespoke private African photography safari itineraries and small group photo safaris.

After living in the African bush and on remote locations he is now based in the city of Johannesburg, South Africa. From this base he works as a private safari guide and produces his GDT wildlife prints which he ships across the globe. He is also available as an African wildlife photographer for commissions and was commissioned by the National Geographic Channel for the launch of their Great Migrations series.

Greg was selected by the California Academy of Sciences as a judge for the Big Picture Natural World Competition and in 2021 he joined forces with some of the most renowned photographers in the world to auction prints for the ‘Art For Wildlife Rangers sale’. As an African conservation photographer Greg regularly donates prints to charities, see a list of charities he supports here.