All the African wildlife photography prints in this GDT Signature Collection are rare moments of splendour and each is limited to just 1 of 5 numbered prints worldwide and are printed in an X-large or custom size. Zebras In Dust - Photographed on one of my 'Bespoke Best Of Kenya' private photo safaris, this image is a personal favourite. It reminds me of Africa, a place I love and a place I call home. 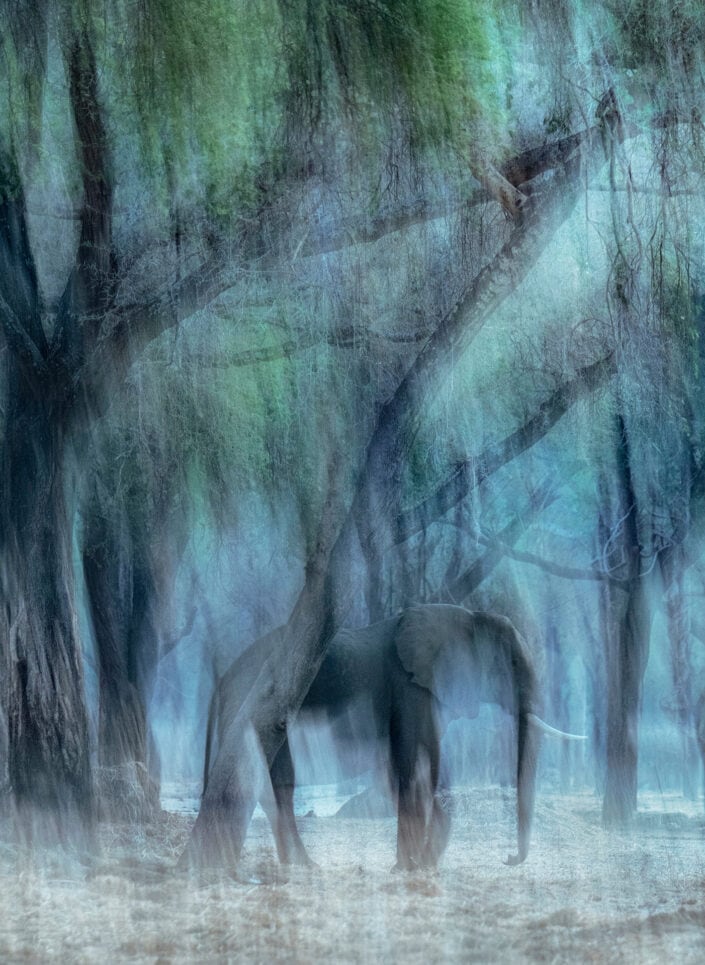 Vanishing Elephant - This photograph is the result of thousands of failed attempts but I feel it was worth the effort to get it right in this frame. This photograph illustrates that elephants and indeed other wildlife, and their habitats, are vanishing before our eyes (Zambezi Valley, Zambia). 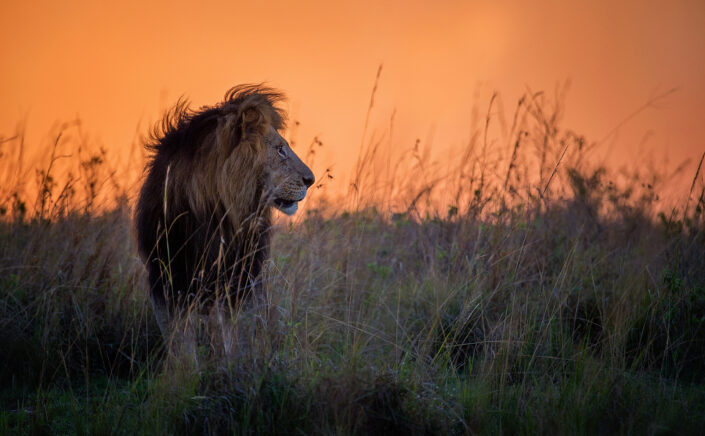 Mara King - In the dawn light, this beautiful lion paused momentarily on the great plains of Kenya's Masai Mara, allowing me to capture this stately portrait. Photographed on my annual Kenya 'Masai Mara Predator Safari'. 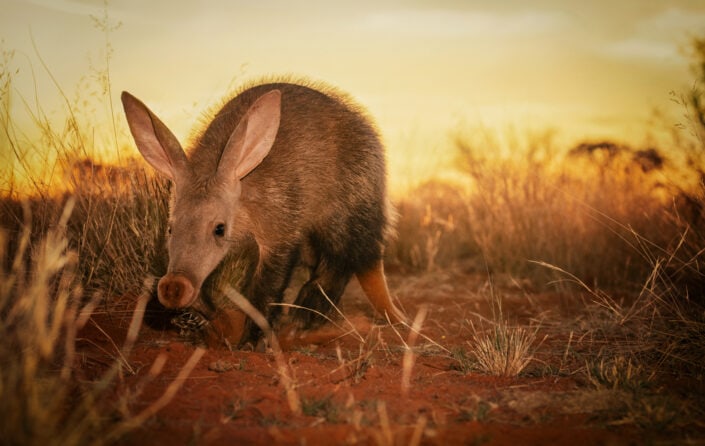 Kalahari Aardvark - This photograph took me 19 years to get because aardvarks are really shy and nocturnal. Stalking one in the Kalahari grass, I could not believe my luck when it walked right past me (Kalahari Desert, South Africa).

Puzzled by Pangolin - It took me 18 years to find a pangolin and when I did, these young lion cubs had beat me to it. They played with the pangolin and seemed utterly perplexed before eventually giving up (Masai Mara, Kenya). 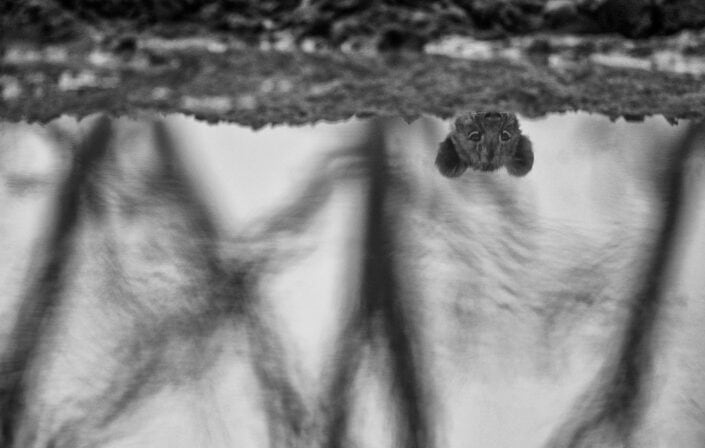 Lion Cub Reflection - Lion cubs get very excited about visiting the waterhole and they often run ahead of the pride to get to water first. Here a young cub pauses at the water's edge, waiting for his mother, and allowing me to capture this reflection (Okavango Delta, Botswana). 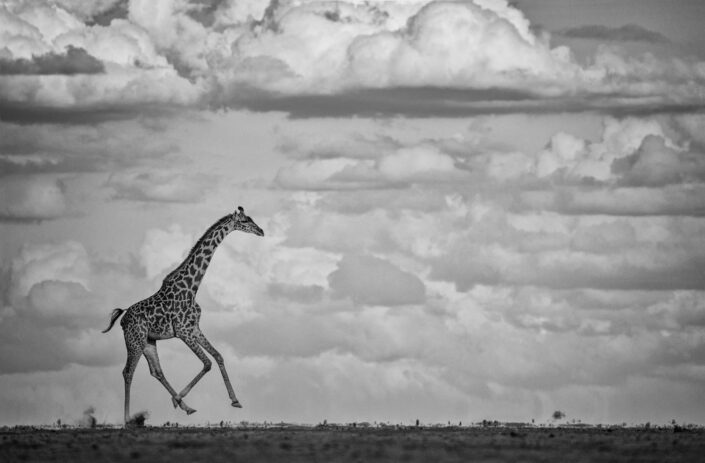 Galloping Giraffe - A giraffe crosses the dry lakebed of Amboseli in Kenya, with billowing clouds in the background. 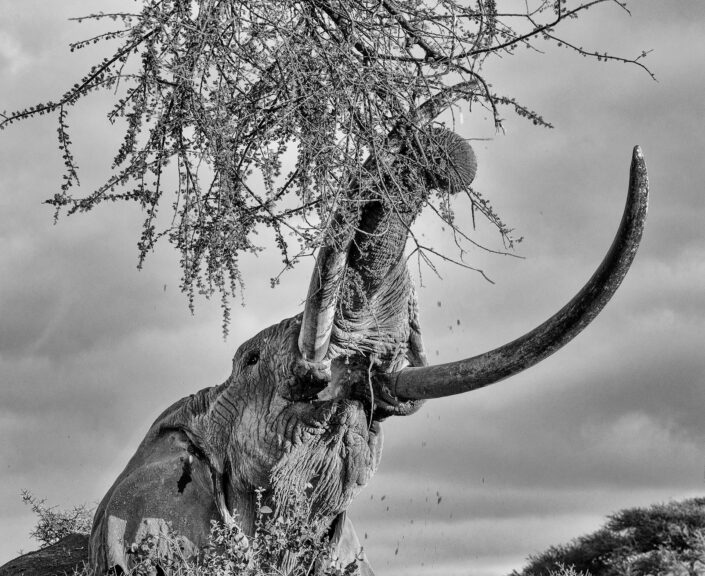 Beneath A Giant - It took me many years to track down a tusker in Africa and when I found this elephant, I waited for him to lift his head to feed, so that I could capture his impressive tusks. Photographed on my annual Kenya 'Amboseli Photo Safari'. 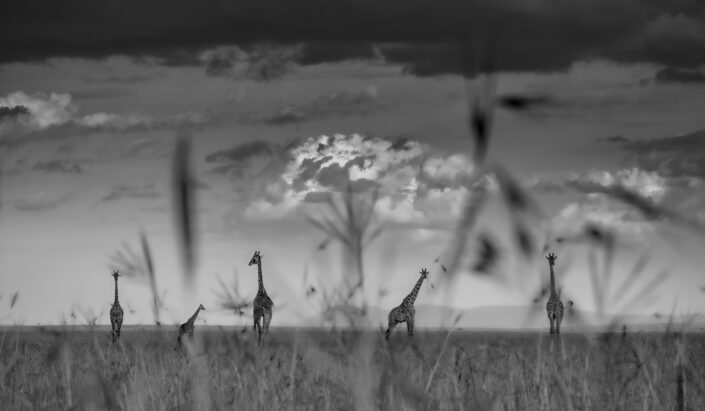 Giraffe Plains - From a low angle and by placing my subjects between the grass blades, I photographed this tower of giraffe on the great plains of Kenya's Masai Mara. 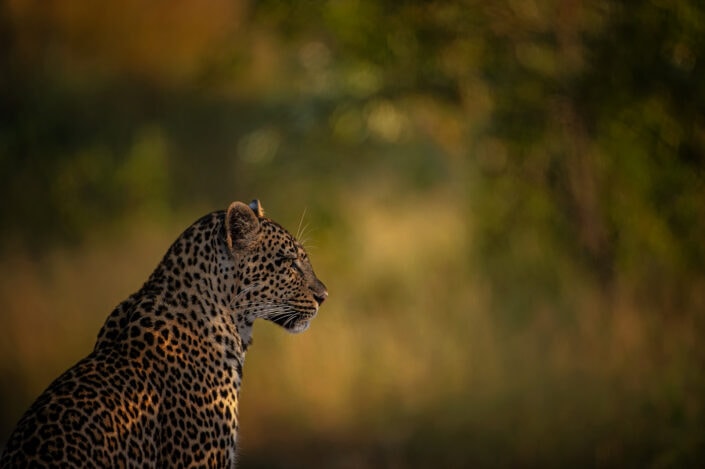 Golden Leopard - This beautiful leopardess occupies a territory along the western boundary of South Africa's Kruger National Park. Here she sits momentarily in the golden light of dawn.

Painted Wolf - In a remote forest in Zambia's Lower Zambezi National Park, a pack of wild dog were on the hunt when one paused to inquisitively stare at me. The golden light filtered down through the trees, creating a background of golden disks. 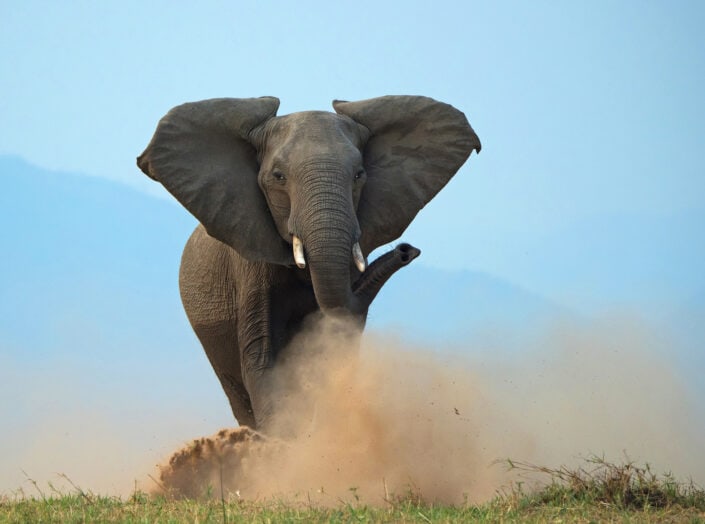 Elephant Charge - Floating down the Zambezi River on a canoe, my wife and I spooked this elephant who was grazing on an island in the middle of the river. He gave us a mock charge and I dropped my paddle (much to my wife's dismay) to capture this low-angle portrait (Mana Pools, Zimbabwe).

Ngorongoro Tusker - At the bottom of Tanzania's Ngorongoro Crater lives one of Africa's great tuskers. He is about to give a head-shake in this photograph and as he lifted his head, I could photograph the full length of his tusks for the first time. Photographed on my Tanzania 'Ngorongoro Crater and Serengeti Safari'. 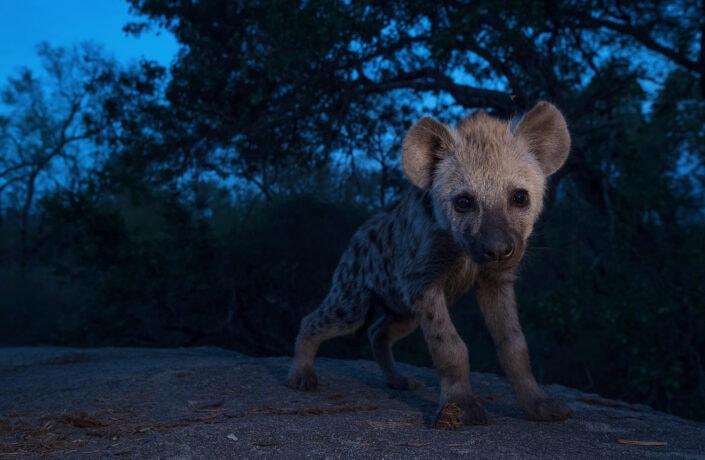 Hyena Cub - It was in the twilight that this hyena cub became brave and walked closer to inspect me. Using a wide angle lens I was able to capture this unique portrait (Mala Mala Game Reserve, South Africa). 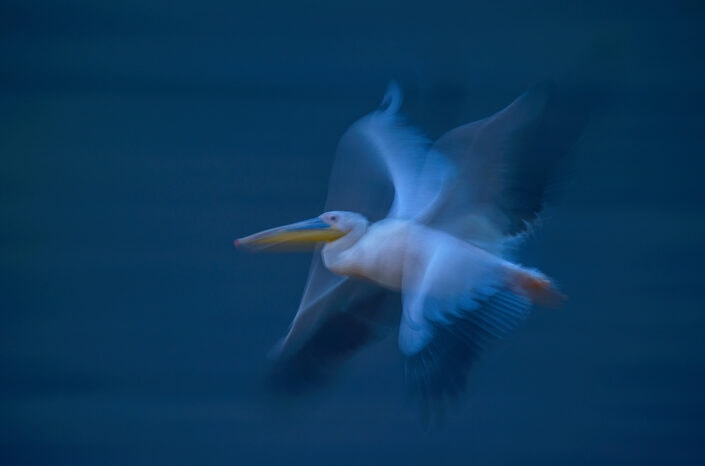 Pelican in Motion - I was standing on the shore of Kenya's Lake Nakuru when this pelican flew past. The slow shutter speed allowed the blue twilight in, as the pelican flapped its way through my frame. 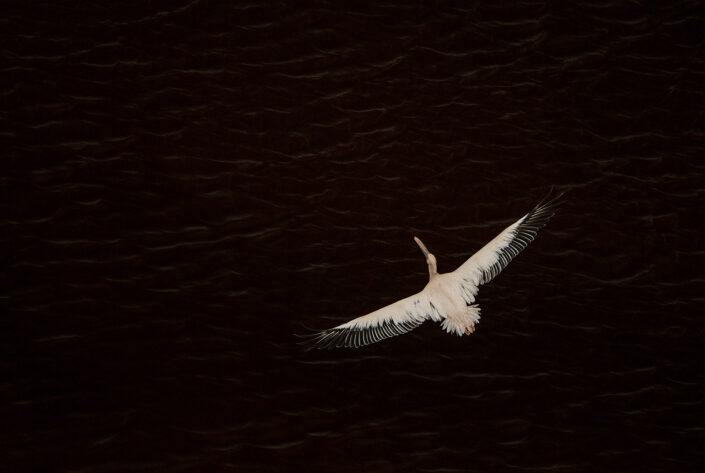 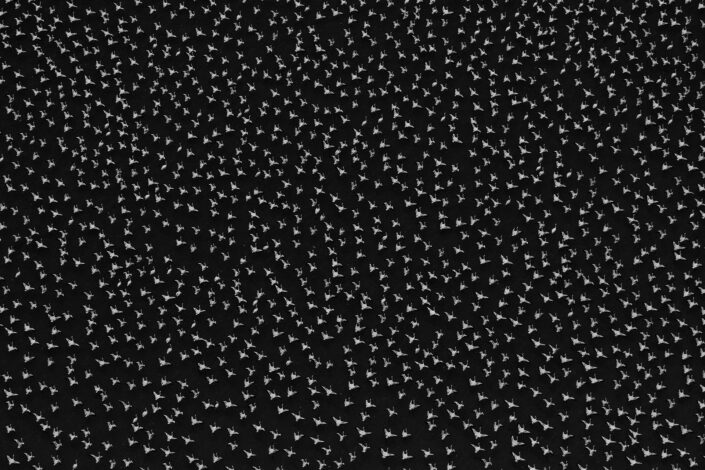 Flamingo Sprinkles - Flying high above Kenya's Lake Magadi in a helicopter, I zoomed out to capture the full extent of the avian spectacle below.

Golden Lion - A male lion, one of the dominant members of the Kambula Pride, looks up in the golden light of dawn (Mala Mala Game Reserve, South Africa). 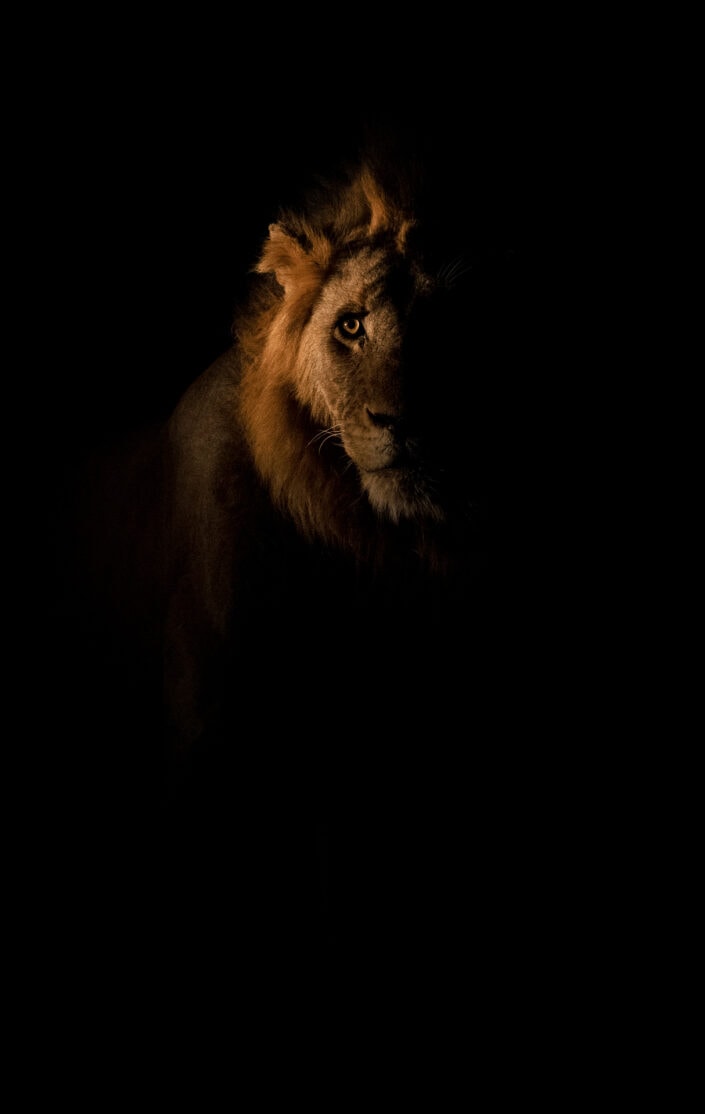 Night King - A lion steps out from the shadows allowing me to create this painterly portrait of the night king. Photographed on my annual 'Botswana and South Africa Predator Workshop'. 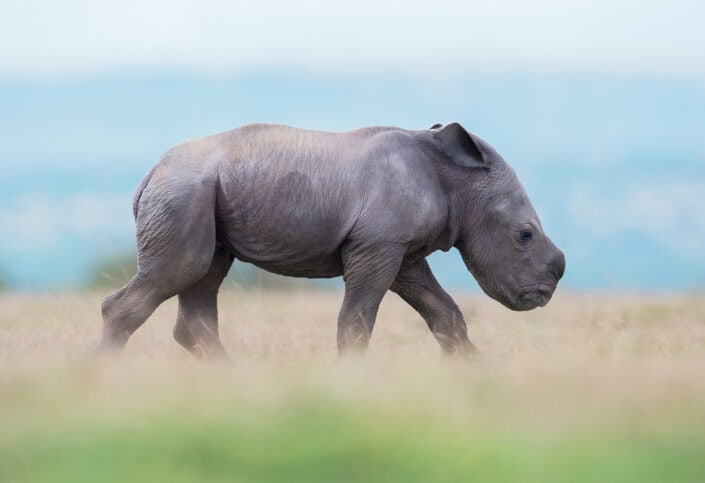 Walk On - A tiny rhino walks on. We have to do everything we can to make sure that as a species, the rhinoceros walks on. Photographed in a secret location in Kenya. 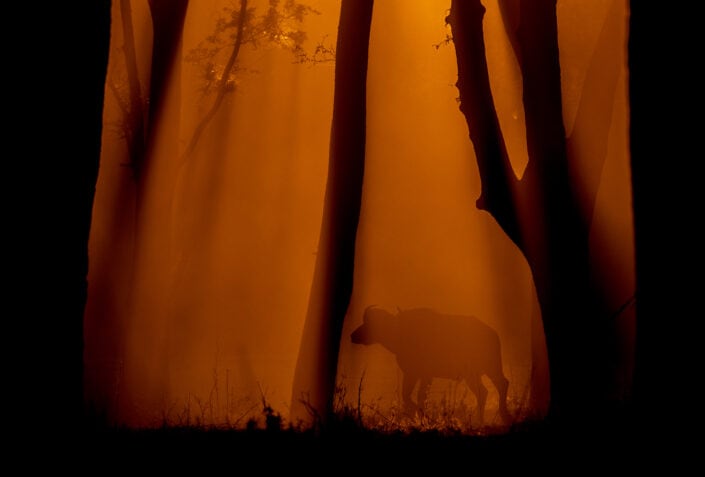 Buffalo Forest - In the early light of dawn a buffalo bull walks through a forest on the banks of the Zambezi River in Zambia. 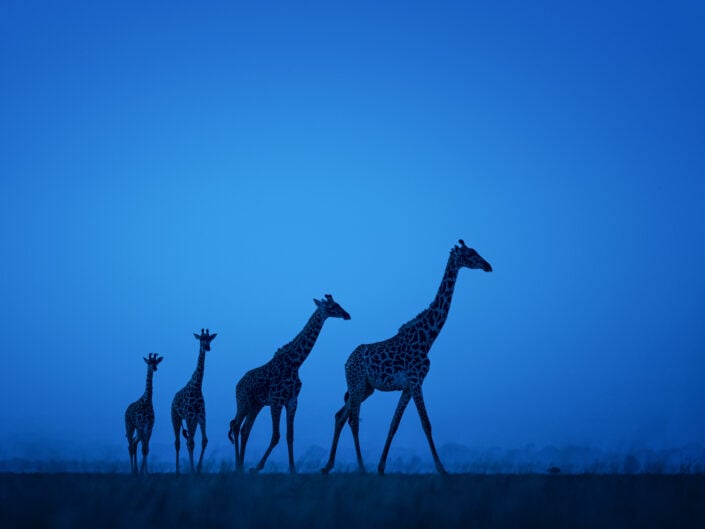 Twilight Giraffes - At the base of Mount Kilimanjaro I waited in the twilight, hiding in the grass, as a journey of giraffe ambled towards me in single file (Amboseli, Kenya). 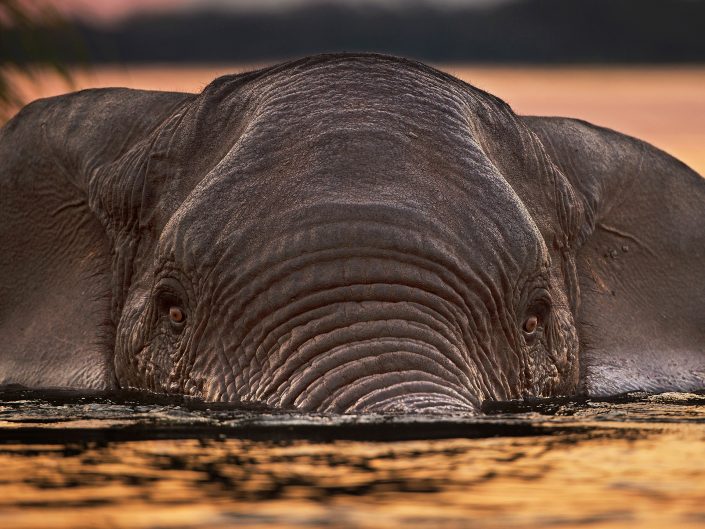 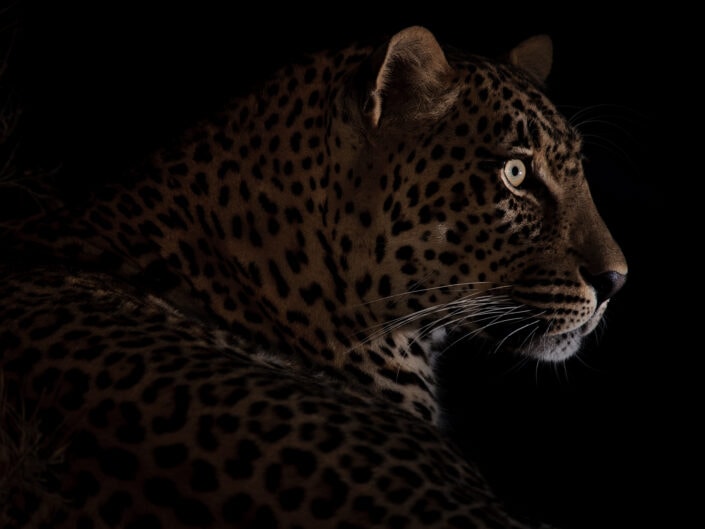